Refugees at Home is a UK-based charity, but sometimes news of our work spreads around the work – and this week is one of those times.

One of our wonderful hosts, Rabbi Jonathan Wittenberg, has written for the The New York Jewish Week about hosting M, and the religious values that led to him becoming part of our R@H family.

You can read the full piece here, or it is reproduced below…

He’s been living with us for several weeks, through Refugees At Home, a small British NGO which links asylum-seekers who would otherwise be sleeping on the streets with families who have a spare room.

I’m usually less generous when woken at such an hour, but I know Mhas fled for his life, passing terrors beyond my sheltered imagination. If this is the hour when he feels able to tell his story…I get up, sit with him, and listen. He makes me swear not to repeat what I hear.

The issue is not somewhere, but everywhere, in Europe, Israel, America. The contexts differ; they arrive from different countries. But they are all refugees, the past a trauma, the present a nowhere, the future – is there even such a thing as a future?

I’m walking with a group of faith leaders through the refugee camp at Calais known as ‘the jungle’ wearing my kippah when a man accosts me in rough Hebrew: “I’m from Darfur. I was in Israel. They were nice, but there was no future. So I went back home and they tried to shoot me. I escaped here; yes, on foot, and by those boats across the Mediterranean…” 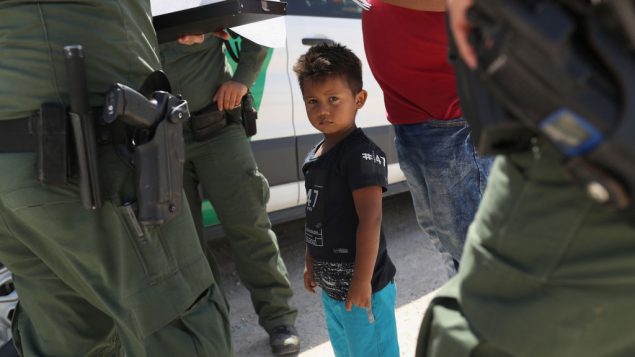 U.S. Border Patrol agents take into custody a father and son from Honduras near the U.S.-Mexico border on June 12, 2018 near Mission, Texas. The asylum seekers were then sent to a U.S. Customs and Border Protection (CBP) processing center for possible separation. Getty Images

I’m on the shore on Lesbos, looking towards the Turkish coast from where the fragile inflatable dinghies overloaded with terrified families set sail. “Show me,’ says a worker from Isra-Aid, pointing to the orange life-vest I’ve picked up from the shore. “Tear the lining,” she instructs me: “Look, that material inside is water-absorbent. That’s a death-vest, not a life-vest,” she says.

Misery is profitable for some.

I visit the Muslim cemetery, created by a single volunteer among the olive groves: The inscriptions read: ‘Baby, no name’; ‘Girl, 3, no name’; etc.

I’m at the drop-in center for destitute asylum-seekers run by my own community in North London, where people aged from 12 to over 90 volunteer, together with supporters of all types and faiths. Inside are men, women, babies, from the DCR, Afghanistan, too many countries. They need food, clothing, medical attention and, above all, competent and compassionate legal help. They know that between them and deportation stands only a good immigration lawyer and the solidarity of good people, committed enough to put their time where their values are.

One day, Levi Lauer, rabbi, passionate Israeli social activist and creator of Atzum which campaigns against the sex trade, speaks at my home:

“What’s at stake? The moral reputation of the Jewish People,” he says. 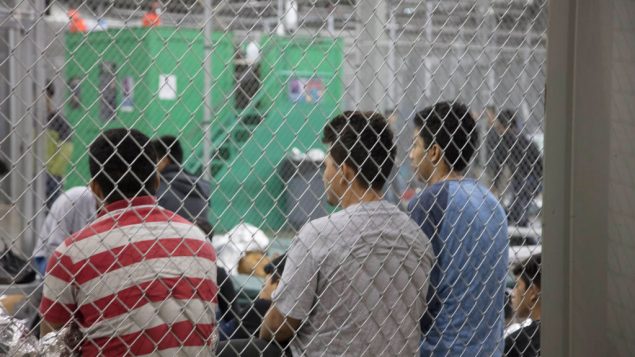 “That’s why thousands of Israelis went to the streets and declared: ‘We will not deport. We will shield these people physically;” 2,200 families have said they’ll take people in. Members of the kibbutz movement are committed to taking as many as they can.”“How can Israel contemplate sending 38,000 asylum-seekers from Eritrea and the Sudan to their probable death in countries in Africa who don’t want them? Such an action would undermine the very cause why the State exists, the reason we left Egypt, the foundation of why we are a people – to protect the most vulnerable, the ger, yatom, ve’almanah, the refugee, the orphan and the widow.

In recent days the focus turned to the brutal separation of children from their parents on the Mexican-American border. After protest from the closest possible domestic quarters President Trump has apparently put a stop to this brutal cruelty. But it remains unclear where the separated children currently are, or how they will be reunited with their desperate parents.

Responsibility towards refugees is the concern of us all.

It a moral requirement profoundly rooted in Judaism, text and history. “Do not oppress the stranger, for you were strangers in the Land of Egypt,” teaches the Torah. It’s Judaism’s most basic paradigm; Jewish ethics summed up in a sentence: You’ve been outsiders, repressed, reviled; you’ve known injustice, indignity, cruelty: therefore, do justice, exercise humanity and practice compassion.

Samson Raphael Hirsch, who fought in the Austro-Hungarian parliament for Jewish civil rights before becoming the leader of the Orthodox community in Frankfurt, put the matter bluntly: “Beware lest in your state you make the rights of anyone dependent on anything other than the simple fact of their humanity, which every human being possesses by virtue of being human. With any diminution of this human right, the door is thrown wide open to the whole horror of the experience in Egypt.”

Like many, I have a more personal reason for being involved. Both my parents were refugees by the age of 16. When my mother fled to Britain from Nazi Germany in 1939, she and her parents were hosted for many months by a Christian family. “What can we ever do to thank you?” my mother said when they eventually left. They answered, “You’ll thank us by one day doing the same for others.”

M, who lived with us while managing (unlike most) to gain leave to remain in the UK, takes his responsibility towards other refugees very seriously.

To be most effective in living our own responsibilities as Jewish communities, we should share best practice across our different countries, to learn from and encourage one another.

After years as asylum caseworker for a Member of Parliament, Caroline Smith wrote the award-winning collection “The Immigration Handbook,” including the poem Removal about the last minutes before a deportation:
“The life support around you has been taken away.*

It is up to us to help put it back